The state of New Hampshire is nicknamed “the granite state” because of its history of producing a great deal of quality granite. Among the many quarries, the Redstone Granite Quarry in New Hampshire started operating somewhere around 1887, ran for more than 50 years, and shut down in 1948. It harvested red and green granite and made up for much of the economy in New Hampshire.

Redstone is an unincorporated community within the town of Conway in Carroll County, New Hampshire, United States.

The quarry and the town associated with it lie abandoned and are attractive tourism sites for historical sightseeing.

So, where exactly is it located, and what are the important historical facts and figures related to it? Let’s find out!

A company called Maine and New Hampshire Granite Co established the Redstone granite quarry in 1887. They also built the adjacent village for the workers of the quarry and their families. It had a school, church, post office, a poolroom, dance hall, railway station, departmental store, and about 20 houses for quarry employees.

In the 1870s, the railroad joining Portland and Ogdensburg with Boston and Maine required granite stone for its bridge abutments. The railway service obtained huge granite blocks from the base of the Rattlesnake Mountains to meet this need. In 1880, the Maine railroad roadmaster, George Wagg, brought to light the superiority in the stone’s quality. It was uniform and could split easily. By 1887, Wagg formed Maine and New Hampshire Granite Company and bought lands in Redstone. The company later extended the quarries by buying more land in Rattlesnake Mountains.

The first pieces of stone produced by the company were transported in 1886 to New York and Portland, Maine.

Thou hast seen
nothing yet

In 1888, Maine Central put up its railroad station in the Redstone village. By the 20th century, Redstone became one of the largest quarries in New England. Workers commuted to and from the area from surrounding towns and villages. The quarries employed over 350 men at one time. These included quarrymen, engineers, cutters, polishers, carpenters, carvers, blacksmiths, etc.

The company produced two colors of high-quality granite, which was its main selling point among competitors. These stones were supplied all across America, New York consuming the most part. In its prime time, it has produced a little less than 2 million paving stones a year. The Grant’s Tomb in New York, the Masonic Temple in Alexandria, and the National Archives building, Washington utilizes the pink granite from Redstone. Additionally, the Hatch Memorial Shell, Boston, uses Conway green.

Derricks or rail sled systems transported huge blocks of stone to the cutting area. Ox or horses pulled wagons for the same purpose. The stone had to be moved from quarries located up a slope to the stone sheds down the hill.

First, the granite was cut using a primitive version of a modern band saw, known as the gang saw. These produced loud noises and were mounted on a crib. Then, the final polishing of large granite columns was done by lathes. One such lathe and the building it was placed in is still present today.

With the advent of World War II, the economy took a dip. Furthermore, granite was largely replaced by cement and lime for construction purposes. Also, most of the quality granite was extracted from the site by the 1940s. The quarries thus shut down in 1948, and the Redstone village and property were sold at auction. The machinery, however, was left abandoned, the cause for which remains unknown.

Many of the employees bought their company houses which is why the Redstone village is still intact in the town of Conway.

The area houses a lot of industrial history. It is rich in machinery, and other relics and artifacts from the 1800s, waiting to be reclaimed by nature. Much is rotten and rusted but gives a feeling of stepping back in time for the visitors. Though most of the buildings have collapsed, one can reimagine the town using old photos, remaining grounds, and local ancestors’ stories.

Large boilers were fueled by coal and used to run huge air compressors that produced high-pressured air for pneumatic machines. Remains of their connection pipelines can still be found under vegetation. Masts and tall wooden derrick booms also lie abandoned on the ground.

Some of the railroad sections are also found. Old photos of the area show an extensive railroads system that was used for transporting the granite. The rail provided the raw material and took the finished goods out for supply.

There is quite a lot of granite waste accumulated on the site. There are stacks of both pink and green granite blocks found up on the hill nearby the quarries. Granite blocks, discarded or intended to be smoothed out into round columns, lie abandoned.

The Redstone Granite Quarry in Conway is a great archeological site for anyone interested in the golden era of granite mining in New Hampshire. It is an excellent location for a tour with your family to unravel the difficult lives of the quarry workers.

The granite quarry lies near the foot of Rattlesnake Mountain in a part of Conway town called Redstone in New Hampshire. Be sure to remain on the trail and be respectful of this historical area. The local residents take great pride in maintaining this historical sight, we don’t wish to see the few historical sights still open to the public be closed due to lack of respect for the area!

All About the Basin in Franconia Notch 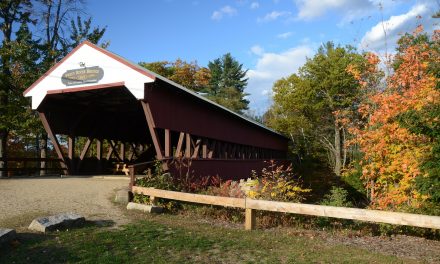 All About The Kancamagus Scenic Byway 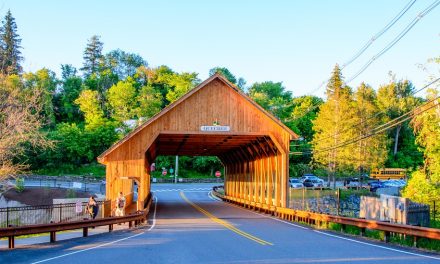 Things to do in White River Junction, VT

The Redstone Rocket in Warren NH